My next project is called Mars After Midnight and it’s a small game for Playdate.

The Playdate is a lot of fun to work with -- fantastic 1-bit Sharp screen, novel crank input, simple development API, and great support from Panic.

I puttered around trying to find a good concept that I felt worked well with the hardware and this is basically where I ended up. Unlike most of my dire last few games I'm gonna try to make this one a little more light-hearted. Something my kids might like.

Right now the concept is still pretty thin. Think Papers Please, -lite, with no border checkpoint, no desk, no paperwork, on Mars. Actually maybe don't think that. I only have the elements of a game and not the full thing yet, so things are still pretty open-ended. The elements:

The screen on the Playdate is amazing but it's also physically pretty small. This is almost the opposite of the problem I had with Obra Dinn, where the huge size of a computer monitor in front of your face requires special considerations for low-res 1-bit graphics. For Playdate the fine details and careful dithering don't have much of an impact on a 6cm x 4cm screen so bolder graphics work better.

Dealing with the small screen size also stumbled me into the core mechanic of "peering through a window." Since apparently I can only make first-person games, and it's hard to feel ~there~ on a small portable I thought making the screen represent a peephole on a door could be interesting. I'm going to turn the parallax knob until it breaks off.

The Playdate's got this great mechanical crank on the side that's begging to be used. I played around with a few ways of crankin and found that a light touch felt best. So the crank is treated as a short-throw lever instead of a rotary control and maps directly to the position of the hinged window. It's nice when in-game mechanicals can match actual physical mechanicals 1:1 so thanks, crank. 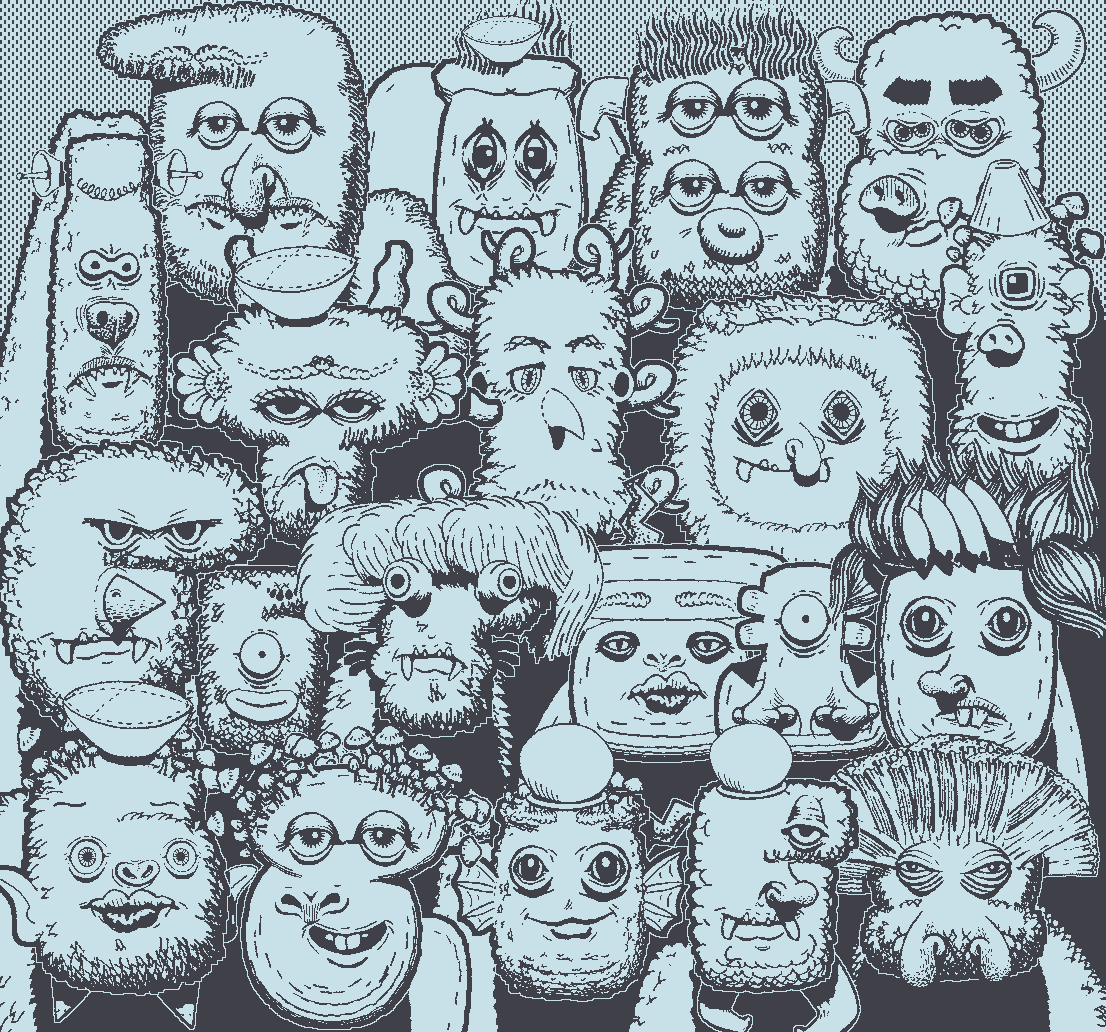 Right next to the [first-person] box in my wheelhouse is the one labeled [gobs of faces]. Thinking about what kind of kid-entertaining stuff I could put in a game, "funny faces" seems doable.

To generate martians, I'm drawing separate features by hand and combining them procedurally. This is different from Papers Please, where I drew whole faces, chopped them up, then recombined them; and also different from Obra Dinn, where I mixed random low-poly head features in 3D before hand painting each face texture.

The faces need to be interesting for this concept to work so their generation is what I've spent the most time on so far, and I'll put together some more technical posts about exactly what I'm doing here later.

It's been a couple years since I've kept a devlog. I enjoyed writing this up though so hopefully I can keep it rolling. Previously I posted on TIGForums but let's try things out here on itch.io for this one.

On Mars, after midnight, at the off-colony community support center. For Playdate.

To everybody requesting an update: looks like the dev has been porting "Paper, Please" to phones for the last 8 months (scroll down to the last paragraph)!

just curious, are you still working on this game? and any new info you can talk about?

When do you think you’ll post the next dev update?

> Previously I posted on TIGForums but let's try things out here on itch.io for this one.

Aww, but we miss you on the TIGForums!

time to get a playdate, everyone

Delighted to see you posting devlog on itch

Super hyped for another gem from you

Playdate is on my wishlist because of this now!

Fantastic! Can't wait for the technical posts on this. Maybe I need to get a Playdate now.

Haha, good luck with that, playdate community is waiting for it for 2 years already

The website says pre-orders begin in July? Is that too optimistic?

I hope this encourages other developers to consider exploring Playdate!

this looks so interesting !! I hadn't heard of the Playdate before this and you're utilizing its unique features in such a cool way

I was hoping you'd do something for Playdate! I am very excited about that little game!

Seeing your use of the controls with these game mechanics has sold me on the Playdate being the most Nintendo non-Nintendo console ever. I look forward to seeing how this develops!

Great to see a devpost on this game! Love that you are finding the Playdate fun to develop for and can't wait to hear more from this.

Wowie! I can see the Obra Dinn and Papers, Please in this. How exciting.